4th level of SAMR with Minecraft

According to the local collective expertise of the neighborhood, I have done wrong when I use a computer game in homework, because no one can do it right?

Actually I shouldn't bother, but it annoys me that you miss a lot of good learning that occurs automatically in a computer game while otherwise, in a more traditional teaching, you learn one thing, like a tool. Like to handle a saw without wood as Arjen put it: 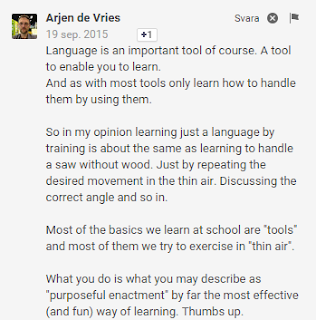 My daughter (like every Finnish pupil) has one reading homework every day. Usually in combination with "but oh, why now? hasn't it been 10 minutes (of reading) yet?". When using a game they can sit there for both 30 as 40 minutes trying to break the code (and get a reward).

What did I do?
I did an animal corral in Minecraft, wrote LAMMAS on the sign and when she cracked the code, she put a sheep there. Actually, when she had cracked the code she said and I quote:
"L-A-M-M-A-S! Lammas! Det är ett får! It's a sheep dad!"
Instead of learn one language she was talking three languages! More information of the experience can be found here and here.

Together with my mentor I've tried to apply my method, using a game, to the SAMR model.

Yes I know, it's a criticized model as it forces the teacher to re-think and therefore it's certainly very difficult and most likely a useless model. (Sarcasm)

Would it be possible without technology?
"Partially, but not close to the same extent. Therefore we're moving to higher levels of SAMR. The interesting thing here is that she learns words in several languages and can almost feel what it looks like in reality."


My mentor replied: Where occurs learning?
When I had her to reflect by herself, when she had to think a while and analyze what she's just done. More learning occurs.

There is finally the fourth level of SAMR: we have to define the task so the reflection can be found in the task's starting level. 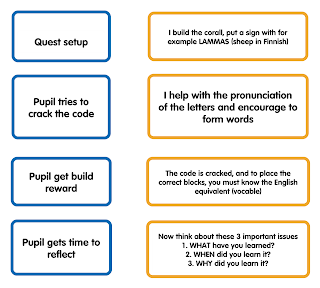 The teacher's role?
As I hope is clear, the role of the teacher is no longer only to check, correct, and score the one answer that theoretically could be googled (able to find ready served replies).

Instead, the teacher acts as a facilitator during the process to "crack the code" and afterward the one which makes the important questions:
These questions you can't google the answers to.

What did she thought she had learned? Well, according to the three important questions she told me:
"I learn to read, when I practice, discuss and build. I learn because its fun and I can build it."
(AquaVera 7 yo)

Another important aspect, you see how uninteresting it suddenly became for the pupil / student to get involved with other things with his Internet speed than to get the right information?
Posted by Kalle Ögland at 23:06